There was a request from a reader named Sexy Sadie, who requested a plum smokey eyes tutorial. I decided to go ahead and do my version of plum / burgundy / purple eyes, a bit on the dramatic side, but hey, that’s what I’m all about.

This is picture heavy, and be patient with me. I spent my entire day doing this for you. =)

I used the Clarins Instant Smooth primer, which helps with minimizing pores, fine lines, you get the picture. I then used Revlon ColorStay (the original formula, which is discontinued) in Tawny using the MAC 180 flat top buffer brush (also discontinued). Some of these disc. items can be found on Ebay or through makeup swap sites like makeupalley.com

I wanted to add a little shimmer /glow to the skin, so I found an eye shadow that comes in a tube and looks white when you look at it in the container, but on the skin, it’s a bluish, iridescent color. It adds a really cool touch around the eyes, which I will show later on.

I added Bare Escentuals, BareMinerals bronzer “Warmth” to the hollows of my cheeks using the handy buki brush.

Using my Anastasia brow stencil, I powdered in the brows with MAC Showstopper powder shadow. I did not use the second half of the brow stencil, I normally fill that part in freehand.

Now for your favorite part.. the eyeshadow. This was a bit tricky working with the pigment, which can be very messy if you are not careful. I had to wipe my under eye area a few times to make sure to get all of the fallen eyeshadow off. I made the mistake of not using a primer on my entire lid area, I guess I forgot. The end result would have been a smoother eye, but I forgot.. forgive me! Anyway, I applied the MAC Fluidline in Macroviolet on the lower lid using a concealer brush.

I then applied Macroviolet to the waterline inner rim of my eye, and a bit on the outside of that where the lashes are. I follow the brush up towards the outer corner of my eye to create a border.

I carefully patted the pigment over the bottom lid, being careful not to get into the crease area. I did not wet this product, it stuck to the lid pretty well all on its own.

These next two brushes are ones I have had for years. I love them. One is the must-have MAC 224 Tapered Blending Brush, which is a really soft, blending brush that works great for blending the crease colors. The other brush is a big version of the 224, it’s the 225 brush, which I do not think is sold at MAC anymore.

This next part was scary. I had to wet the 224 brush, dip it into the Lancome Drama Purple shadow and then paint it in the crease. The only reason why I wet the brush was because the color was not showing up due to NO PRIMER..like I said, I totally forgot.

I felt as if I needed to work on the bottom portion of my eyes. I lined the inner rim waterline again with black gel eyeliner by Bobbi Brown. I thought it needed to be darker in that area. With the MAC 219 pencil brush, I used the Lancome Drama eyeshadow over the top of the MAC Fluidline that I put on earlier to give it that smokey look. I lined the top lid.

After applying one coat of mascara to top and bottom lashes, I applied one of my favorite blushes of all time. Discontinued .. of course.. it was from a Benefit cosmetics limited edition line in about 2003 or 2004, called Shangri-la Sheers. This blush is really hard to find, but I’ve seen it on ebay. It’s also a hard color to find. It’s a really light lavendar, medium pigmented, not heavy.

I wanted to plump my lips for fun.. I haven’t used this in a while, but I busted out my LORAC Lip Addiction in Super Hot and let the burning begin.

My lips were burning, but it was pretty much worth it. The pictures don’t do it justice, and I couldn’t freaking focus the camera with one hand to get a good pic. The plumpng action lasts for about 15 minutes, good for pictures and stuff, but it’s not really going to do much as far as the entire day goes.

I applied MAC lipstick in Up the Amp over the top of the LORAC lip plumper, so it came out a lot more sheer than it would if I used it alone. 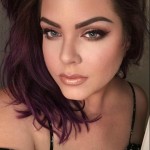 Makeup Artist | Beauty Blogger
I am Krista, the author of KristaRobyn.com. I started a career as a pro makeup artist in 2001 for Benefit Cosmetics in the San Francisco bay area, and transitioned in 2006 to pursue jobs in the Silicon Valley. I am currently working as an editor in the media industry, where I contribute to original content that includes beauty articles. I am occasionally doing freelance makeup jobs, but spend most of my time working on improving my health and wellbeing. I have Hashimoto's and PCOS, and plan on contributing articles that touch on these areas, as well as weight loss and Paleo Diet recipes.
← CoverGirl Outlast Lipstain Review
Only at Sephora: Backstage Beauty Secrets →